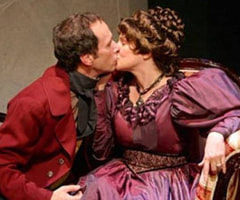 The Germans In Paris
The Arclight Theater (New York)

"Thought-provoking comedy...the sleeper hit of the Off-Off-Broadway season...Mr. Leaf has woven his web of fact and fiction with enviable skill, and the result is a sharp-witted comedy of manners that modulates neatly into high seriousness...Don't dally: the run is short, and the theater small."

"Leaf manages to make café and boudoir arguments compelling by giving his characters full flesh-and-blood…It’s heady stuff, but never boring...This is the rare off-off-Broadway experience that really delivers the goods: a well-crafted play that is as stimulating as it is enjoyable."

"The wonderful new play, The Germans in Paris is a shining gem in the sometimes unpredictable world of off-Broadway theatre… Leaf is one to watch. His use of language is clean and pure, and his characters jump off the page, even before they are embodied by the actors who are lucky enough to portray them… If everything he writes is as wonderful as The Germans, we are all in for a treat.”

"Leaf has proven once again that he can write narrative and develop scenes with tremendous skill."

"Leaf, a nimble thinker and accomplished stylist, manages to challenge and engage the audience...Such scenes showcase the play's sparkling dialogue (Leaf seamlessly weaves in writing from the historical record) and abundant wit. The narrative structure is so deftly conceived that we barely notice the gears at work."

"There are two types of people in New York: those who are intimately familiar with the historical dramas of playwright Jonathan Leaf.... and everyone else."

The comedy-drama The Germans In Paris was rated the highest of all the shows in New York City during its 2007 run according to Theatermania.com audience surveys - above "The Producers", "Hairspray" – above every other show then playing in the nation’s theater capital. ​