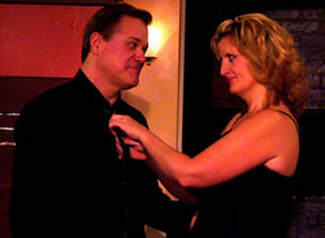 "It doesn't often happen that a piece of theater grabs you by the lapels, keeps you on the edge of your seat and doesn't let you go until it's good and ready. That's what happens in Jonathan Leaf's The Caterers…plausible and gripping...Remarkably, Leaf also injects humor into his chilling tale….an extraordinary level of suspense...The play moves powerfully, unerringly to its grim conclusion."

"Talk about timely...So nightmarishly believable a portrait of terrorism in action that the friend with whom I saw it had a panic attack when it was over... I've been hearing good things about Jonathan Leaf for the past couple of seasons, and now that I've finally seen one of his plays, I understand what the fuss was about."

"There have been a few plays riffing off 9/11 for some inert limpid equivalist meditation, but Leaf cuts to the chase... taut, riveting...Leaf grabbed the big theme and found an angle on it...Unlike the navel-gazers who infest so much of the American theater, this guy is engaged with the world and deserves a bigger audience."

"This tightly plotted play moves at a fast pace with no intermission to break up the suspense or spoil the illusion that you are trapped in the room. Because of this, the anxiety level can get quite high, and several audience members were crying or covering their mouths in horror. When the play ends, it is hard to shake the feeling that you have just spent the past 80 minutes locked in a room with a terrorist."