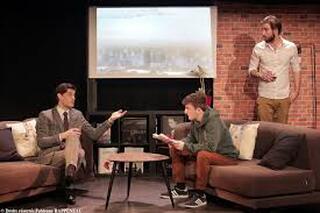 Before and After Pictures
Théâtre du Funambule-Montmartre (Paris, France)

The production, directed by Joy Belmont, was not reviewed in French newspapers. But it did receive almost fifty online reviews. 85% rated the play "Bravo!," and there was not a single negative review as crowds laughed and were moved by this funny, fast-paced drama. An English-language version of the same play received a Best Play of the Year Award from the Actors Studio in New York.