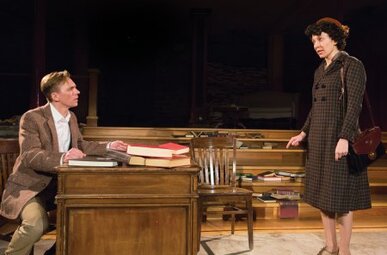 "Powerful and astute...an erudite detective story...Leaf strikes a rare balance between narrative and thesis, between action and thought...Deconstruction is a skillfully wrought and unusually weighty play."

"A refreshing and contemporary take on love and philosophy."

"An intelligent exploration of modern philosophy through the imagined personal lives of its leading proponents." 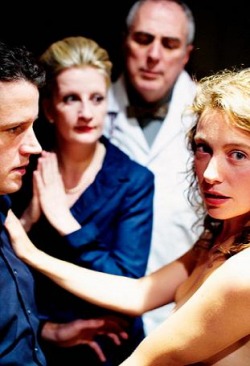 "A fascinating play...intelligence and balance...consistently involving work...The ethical questions are surfaced but never answered here, which is wise: the significance of this play, as of the work of real-life researchers, is to raise awareness of the fundamental issues surrounding sexuality...it is the many moral quandaries that characterize any life that are always Leaf's focus...the subtextual themes always resonate.

Leaf's direction is tight and focused and serves his script well...

Sexual Healing...deals with potentially titillating topics in a grown-up manner...a play like Sexual Healing, that helps provide some perspective on these very universal, very personal matters, is valuable...and surprisingly rare."

"Women will understand...Sexual Healing will have you thinking and discussing the issues long after..."

"Playwright and director Jonathan Leaf weaves an engrossing, intricately woven story that explores the changing attitudes towards issues that remain timely today: the differences between how men and women view sex and marriage, the nature of homosexuality, and how watching or making sex tapes affects desire...

Leaf's strong writing and flowing dialogue come alive through his fully developed, three-dimensional characters...a top-notch production. One leaves the theater looking forward to what Jonathan Leaf has in store next for his audience."

"A play with something interesting to say. While the Sam Mendeses of the world are congratulating each other on their courage for the utter uniformity of their absolutely conventional views, Mr. Leaf has taken a critical eye to the so-called Sexual Revolution and its rather sad cookie-jar full of delusions and pathologies. His view does not seem to be a puritanical one—as indeed his play is not...his approach is refreshing...Mr. Leaf’s characterization and Chuck Montgomery’s performance in the role [of protagonist William Munson] are perfectly calibrated gauges of twentieth-century life...never less than convincing..."

"Leaf, who also directed, has boldly laid bare a cultural turning point...and this play will leave you marveling..."